With wailing sirens to Cusco

Even though at Diospi Suyana we can offer our patients a wide range of medical services, sometimes a patient needs something that we cannot provide. When that happens we usually refer those patients to Cusco or Lima. In both cases we provide the medical transportation to Cusco where some stay and from where others still take an airplane to Lima.

We have had a small patient at Diospi for a number of weeks. This little girl, now 12 weeks old, was born with a rare syndrome which affected her lungs and heart. At first her family brought her to the hospital in Cusco. They were told there was nothing the doctors could do for their daughter and that she would die. Having received this news they travelled to Curahuasi to hear what the doctors at Diospi Suyana had to say.

Fortunately our doctors made a different assessment and they did have hopes for a possibly recovery. The doctors, the nurses, the speach therapist and Vikki also have cared for this little girl with much love and dedication for weeks. Vikki would sometimes tell me about the situation which was very difficult indeed. The girl was suffering from a heart problem but her lungs were also full of mucus. Because of this she was almost constantly sturggling to get enough oxygen and audibly so. Vikki multiple times gave her a treatment to loosen the mucus. Afterwards a nurse would have to use a device to suck the mucus out because the little child was to weak to get rid of it herself. This was already quite intense for Vikki but imagine the mother, sitting next to her little daughter struggling for air for month already, horrible.

One of the problems was a hole between different parts of the heart. This would normally be fixed by a surgeon but at Diospi we have a lot of doctors but no heart surgeon. A first attempt to find a hospital in Lima that would perform the operation came to nothing. They would only operate on the girl when she would weigh 8 kilograms. She did not even weigh 4 kilograms and because she was so weak and could not even drink herself it would be impossible to more than double her weight. Continued efforts were finally successful, a surgeon in Lima was found who was willing to perform the operation.

To get to Lima the girl and her mother would first have to be transported with our ambulance to Cusco. Oebele de Haan, one of the few other Dutch people here (well a Frisian for those of you that know a bit about the Netherlands), normally carries out these journeys. A couple of weeks ago he had asked me if I would be interested to join him on one of these drives to see how this medical transportation work and to, his words, get out of the office for a change. Vikki had not been home for more than 2 minutes on Friday afternoon when Oebele phoned me to see if I wanted to go with him because he was about to transport a patient to Cusco. After getting the permission of my lovely wife I handed over the pots and pans on the stove over to her, grabbed some fruits and ran and slid my way down to the hospital. 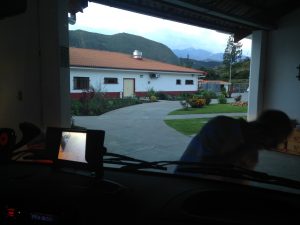 Getting ready to leave 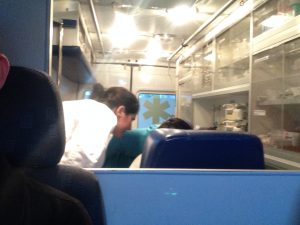 The responsible doctor saying goodbye to the baby and her mother. 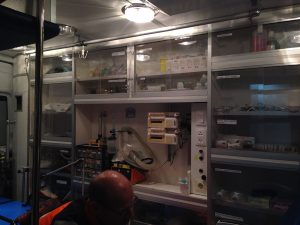 Inside of our ambulance

The ambulance was about ready with mother and child and of course Oebele. After the medical staff also got on board we set out for Cusco with the blue lights flashing. On the road we regularly also needed the sirens to pass other traffic and at certain moments Oebele had to hit the breaks hard because there were several speed bumps at the most unexpected places. On the way the mother, with her baby on her arm, started throwing up because of the many curves. Of course it was serious business but actually it was also kind of cool to race through a city like Cusco with wailing sirens and flashing blue lights. After about 2 hours and 45 minutes we arrived at the hospital, or at least something that was meant to pass as a hospital. 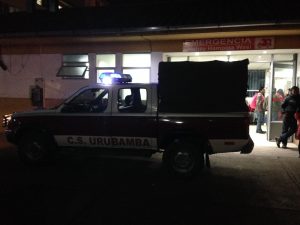 An ‘ambulance’ from a village in the area. 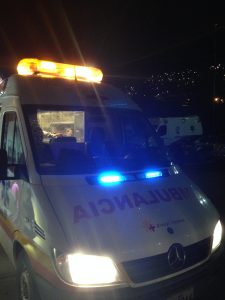 After seeing the emergency wing of the hospital in Cusco I can even better understand why so many people choose to come to Diospi Suyana and why so many are willing to sit outside of the hospital for the entire weekend just to be sure they will get in on Monday. The emergency wing in Cusco was run down, chaoitic and plain dirty. Oebele told me that at times he saw blood still on the walls and that at other times hospital staff would approach our ambulance to receive the patient with a stretcher full of blood. People entered carrying obviously sick children. They could not immediately go to a doctor but they first had to stand in line to fill out some forms. After this they could join another line to buy latex gloves that the doctor would later use to examine their child. Then they could join the rest of the people and wait, wait and wait some more. All of that carrying your sick child. Unimaginable in Europe, reality here in Peru. The Diospi Suyana nurse came back to the ambulance several times to get some bandages and the like because they did not have those in the hospital.

Transferring the little patient took a long time because our medical staff had to keep her on our mobile oxygen machine until she could be properly hospitalised for the night. In the emergency wing, naturally, they had no oxygen machine and the baby would not survive a couple of hours without. After about 2 hours at the hospital we could embark on the journey back to Curahuasi. Before we did that we first had something to drink and a cup of coffee. At about 2 in the morning I arrived back home where I reheated my dinner. 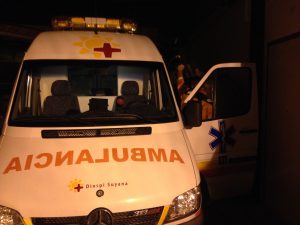 Filling up the gas tank back at Diospi Suyana

We hope and pray that our little patient will be treated well in Cusco and that she will soon travel to Lima. Also we pray for a succesful operation so that at least the heart problem is solved so that she can gain some strength. What a start to life for this little girl. How difficult for her parents to see their baby suffer. How great that Diospi Suyana is here and how marvelous that God called us here to be part of it.