Medical campaign in Poltocsa and an accident on the way

On Saturday the 21st of July, Diospi Suyana carried out a medical campaign in the small village Poltocsa. I (Steven) have been quite busy organising this campaign in the weeks leading up to it. Who is going? Which medical specialties can we offer? Which equipment and what medication do we take with us? And which cars can we use to transport all this stuff and all the people? Thankfully my brother-in-law Robert and my sister-in-law Elsa were here as well and have helped with all the preparations.

Robert and I stayed in the hospital until 20.30 on Friday evening to load the Diospi Suyana’s pick up truck. The next morning we all met up at the hospital at 04.30. After all the other cars had been loaded and everyone had received a breakfast pack we asked God for a safe journey and we left with 9 cars for Poltocsa, about 5 hours away. In total 52 people came along, Peruvians, Germans, some Dutchies and one Chilean. 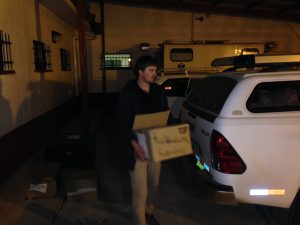 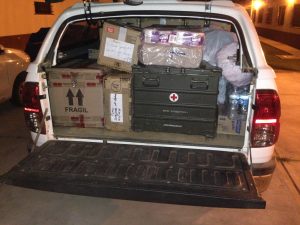 It was not certain that we would in fact go until the last moment. It had been raining for a couple of days and when it rains, the mountain roads in Peru are dangerous because of landslides. The road to Poltocsa has an extra bad reputation when it comes to landslides.Just before we left our director Klaus phoned some people that knew more about the condition of the road ahad. They indicated that we could travel. We indeed encountered many landslides (I think about 25 of them). Some small, others quite big. Thankfully they never completely blocked up the road.

Although the landslides did not really cause problem, something else did happen. I was in the car with Robert and Elsa and two Peruvian colleagues. Robert was driving because I still did not have my Peruvian driver’s license. As a tourist, Robert could drive with his Dutch license complemented with an international one. He was driving slowly and carefully because it was raining, misty and because there were stones on the road every now and then. Shortly after we passed the city Abancay, a car came around the corner toward us with too much speed. He was partly in our lane and when the other driver saw us he quickly tried to get back into his own lane and because of that his car started slipping and hit the back of our car. The Peruvian ladies in our car then shouted (in Spanish): they went off the road! 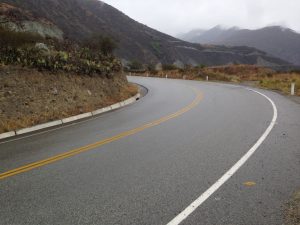 This is where the other car came around the corner

Robert quickly pulled over and he and I jumped out of the car and ran to the other car. We found it upside down next to the road, 5 meters below us. We could hear screaming from the car. They could not open the doors from the inside. Thankfully we were able to open them from the outside. First the father, the driver of the car, came out and he seemed fine. Next a girl of about 6 years came out with blood all over her face and then the father pulled out his other daughter of 1 year. She had blood around her nose and mouth. The mother was not wearing her seatbelt and was laying on her back, on the airbags that thankfully had worked. Everybody except for the father had been sleeping when the accident happened. 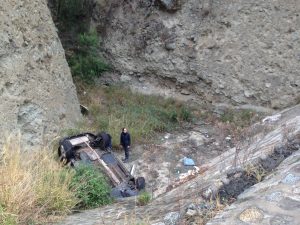 And this is where we found the car

We immediately alerted the police and medics and we tried to calm the children down. The mother was complaining about strong pains in her back so we worried about that. After a while an ambulance came and they took care of the mother. In the mean time some relatives of this family had arrived as well and the father and children went with them. Then it was just us and some relatives of the family left at the place of the accident. We had been there for an hour and the police never showed up. Because the family was taken care of by medics and their relative and because we still had some important thing for the medical campaign in our car, we decided to travel on to Poltocsa, still 3,5 hours away.

Once we arrived we helped with the distribution of clothes to the people of Poltocsa. There were warm coats for the elderly, sports clothers for youth and clothes for the little ones as well. The medical staff consisted of dentists, general doctors, a pediatrician and a gynecologist. Together they saw about 320 patients. 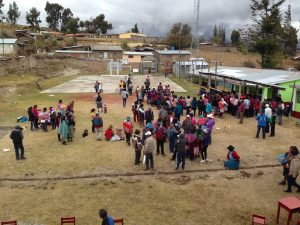 Looking over de schoolyard where the campaign took place 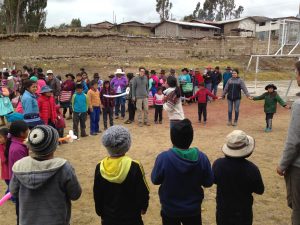 The children’s programme was a success 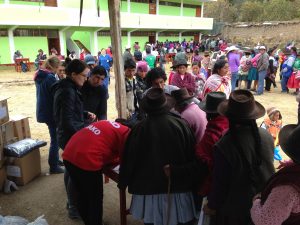 Talking to some people about the accident we decided to head back a bit early and to go to a police station in Abancay to give our statements about the accident. Although it was definately not our fault (which the other driver admitted immediately after the accident) it was suggested to us to give these statements because in Peru there is always the risk that we would receive a letter from a lawyer on behalf of the other family a couple of months later in which they would claim money.

It was already dark when we arrived at the police station in Abancay and we were pretty much spent. The day had started early, we had travelled a lot and the accident itself had also been a quite intense experience. I could not believe my ears when heard the agent to whom we were telling the story told us that the other driver had filed a report against us. Apparently the other driver had gone to the police and had told them that we were in his lane, had pushed him of the road and then took off. In Dutch we have a saying when something really unexpected happens, ‘my wooden shoe breaks’, well that happened. Earlier that day I was holding this man’s daughter in my arms and had her blood all over my own face, now this man had filed a report with the police blaming us for the accident. I have never felt so outraged before.

We had taken photos in which we appeared next to the car which would show that we did not leave the scene. We could also show that we in fact had alerted the police and the medics. Also we received all kinds of information from the other driver because he also knew that he caused the accident while he did not have any information about us. Had we been in the Netherlands, I would not have worried much. There I would assume that the police would in fact be interested in the truth of what actually happened. Unfortunately that is not always so in Peru. Corruption is a very big problem in this country. Next to this the police man spoke firmly to us because we should have come in to file a complaint within 8 hours after the accident, we arrived 10 hours after the accident. The fact that we had not caused the accident, that we were part of a medical campaign and that we had alerted the police (that never showed) and medics did not seem very important.

Meanwhile Klaus and Martina (founders and directors of the hospital) had also come to the police station for moral support. The police man had phoned the other driver and had asked him to join us at the police station. When the other driver entered I felt certain that he would blame us. Just a couple of hours earlier he had done exactly that when filing an official report and of course he could not just change his story now. So I thought. My wooden shoe broke again when he started telling the truth to us and to the police agent. It had not been our fault and we had helped them. In fact, he was afraid that they would have suffocated if we would have not opened the doors. I know in this postmodern day and age ‘truth’ is not a popular concept but what a relieve to hear him telling the truth!  When the police officer asked him why he had told a completely different story earlier that day he just said he had been in shock. We suspect that he filed the official report with the police to be able to get his insurance to pay for the damage.

A memorable day. God really was with us during the accident but He also kept the other family from real harm. To make a fall of 5 metres upside down at high speed could very easily end quite differently!