Last night Steven and I were woken up around 4am by an earthquake. The windows and the cuboards were shaking and the movemement of the groud made a peculiar sound. We jumped out of bed quickly and each grabbed one of our girls out of their bed. We then went quickly to stand at two doorposts that are apparently known to be structural strong points of a house. The quake lasted about 30 seconds. We then went and stood at the front door since earthquakes are also known to stop and then start again with a higher intensity. Thankfully this was not the case and we could go to bed after a little more of our own shaking. Leah was naturally very curious as to what had just happened so we explained it to her; thankfully she was not frightened (though we parents were!). Later that morning we saw that the epicentrum of the earthquake had been at the coast of the province we live in. The strenth of it there was 7.1 on the Richter Scale. We are thankful that this event did not affect Arequipa that much. It made us realise once again that we humans are more vulnerable than we think. 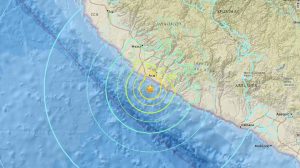