Together with my colleague Matthias I regularly take decisions that affect different areas of the hospital. To have a better feel for the effects of our decisions I have decided to tag along with different Diospi Suyana colleagues in their departments. This week I have done my first few ‘tag alongs’ and I thought it might be nice to give you all a peek into Diospi Suyana by sharing my experiences.

Media center
Tuesday morning I spent some time at the latest project of Diospi Suyana, the Media center. A small team of 7 works very hard to broadcast both radio and television from 4 in the morning until late at night. The boss of the Media center, the Peruvian Doris Manco, showed me around. The idea behind the Media center is to broadcast a message of hope into the Andes. This message is that the Jesus of whom the bible speaks loves each and every listener and viewer and that He was willing to sacrifice everything in order to be in relationship with them. News is also reported by the crew, relevant information about the hospital is shared through these channels and sometimes special broadcasts are provided. Recently there was one for mothers day. Several Curahuasi shops had offered gift baskets and mothers from Curahuasi could phone and put their names on the list for the draw. Last year 20 mothers phoned, this year over 230! At the moment Diospi Suyana radio and television are only available in Curahuasi. Recently other antennashave been placed near Puerto Maldonado, Andahuaylas and some other cities. With these in place the Media center should be able to reach more than 500.000 Peruvians as of June! 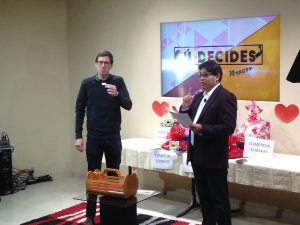 Traumatology
Traumatology does not sound like fun. Nevertheless, we are very happy to have traumatologist from Germany on the team. Last Wednesday morning I had the opportunity to spend some time with Tim Boeker and Peruvian doctor in training Silvia. At 8 in the morning we started with the meeting that the doctors have on a daily basis to discuss special cases and to ask input from the team. After this I was handed a nice long white coat and I joined Tim and Silvia on their rounds. We saw several patients with different problems. There were 2 patients with broken clavicles, 2 others with antibiotic-resistent bacterial bone infections and señora M. This lady was suffering from diabetes, rheumatoid arthritis and had so much pain in her right knee (and leg) that Tim could hardly touch the leg without her screaming in pain. This lady was scheduled to have a surgery later that morning, and I was going to be present. Not long after I changed into a green outfit one wears in the operating theatre. 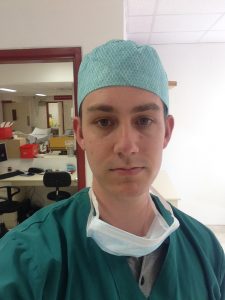 A serious face but note that this was after witnessing the surgery.

The anesthesiologist was already working on señora M. when I entered the operating theatre. She was receiving an epidural so that traumatologist Tim could perform the surgery on her right knee. The surgery started with Tim praying for the patient and the medical team. I was sitting at the sidelines and watching as a camera went into the knee. They flushed a lot of liquid through the knee to clean it up. When Tim made another hole to extract some tissue from the knee, this liquid squirted out of the knee, into the face of Silvia who was assisting Tim. Although surgery is no laughing matter, this was quite funny. Unfortunately the knee was in worse condition than anticipated and had to be opened up completely. At this point I was gettin nerveous because I am working from behind my computer for a reason. I decided to stay and watch as that is why I came in the first place. As I was doing better than I had expected myself, came up closer when invited to in order to have a better look and I did not faint. Unfortunately the leg turned out to be infected way beyond the knee. The infection was so spread out that Tim thought it a miracle that the lady was still alive. In order to clean the leg up as much as possible, it was opened up even further but I will spare you the details. After the operation Tim told me that they feared that these bacteria also were resistent to antibiotics. They were going to start with the strongest antibiotics at our disposal. Answering my question, Tim said there was a 60% chance that they would be able to save the leg of señora M. With prayer 80% he added. So, now where are praying, doctor’s orders… I have much respect for the doctors and the other staff performing these surgeries! Later that day I ran into our director Klaus and I told him that I do not aspire to be a surgeon and that he can count on me as the vice administrador for some time to come.

Policlinic
On Friday afternoon I spent some time with one of our general doctors, the American Mark Gingerich. We saw about 10 patients that afternoon. I enjoyed it very much because Mark was having much direct contact with the people for whom Vikki and I also came here, the Quechua indians. That being said, I did notice that some of them are not averse to a little bit of theatre. There was this chewinggum chewing lady of about 65 years that started telling about a certain pain in her foot. She accompanied her story with loud exclamations like: Oh doctor!! with a face showing a lot of pain. After subtly checking to see if I had indeed been looking at her face she moved it back to the gum chewing position. Before leaving she gave Mark a bag of brazil nuts that she had specially brought for him. Later Mark told me that she had actually not shown for her appointment a week earlier. She had now come to see our eye specialist Ursula because her eye was hurting. Ursula had contacted Mark about this patient of his and she insisted that she would also visit him. Remarkable that this lady who had no intention whatsoever to go and see Mark, did in fact bring a bag of brazil nuts especially for him. However it may be, Mark does not like nuts so I am typing this with a nice treat next to me. Next to a talent for theatre I did get to see what kind of patients come to Diospi Suyana. They really are people with little economic resources that come from far as there is no (affordable) good health care near by. 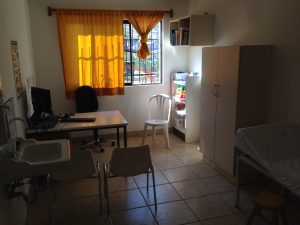 The room of general doctor Mark

This Monday I am expected at 6 in the morning at the gates of the hospital to see how the coupons that ensure an appointment are distributed among those waiting. Some of the Quechuas that I will see on Monday morning are already waiting outside the hospital now on Saturday evening.

Update baby Cusco
In our last blog I told about my adventures with the ambulance. The last couple of weeks I have felt frustrated at times. The little girl that we brought to Cusco should have been transported to Lima the next day to undergo heart surgery. However, again and again we heard that she was still in Cusco. The doctors there did not want to let her leave as she had pneumonia. The poor child had had pneumonia practically from the day she was born and without the (relatively easy) heart surgery she would not be able to gain enough strength to get rid of it. The mother had already told Diospi staff that she really dreaded going to Cusco because this was the same hospital where they had earlier told her to take her daughter home to die. Now she was back and she was stuck. A colleague of Vikki phoned her to talk about the situation and the mother was nearly depressed and not able to answer simple questions. This hospital in Cusco rose further in my esteem when I heard that they had burnt the arm of the little patient. Apparently it is normal to use some warm water to make the veins surface when taking blood from children. In this case they had accidentally used boiling water which made this little girl suffer yet some more. I almost felt like driving to Cusco to straighten them out but as we often have to work with this hospital we have to be diplomatic about these things. Thankfully we know that miracles still exist and this week we heard that the girl and her mother had arrived in Lima after a delay of almost 2 weeks in Cusco. Now we are praying for a successful surgery afther which life can hopefully finally start for this little girl.