Last Friday it was finally time for my last day of classes at the language institute and for our journey to Curahuasi. After we had checked our appartment with our landlord (landlady actually) we and our suitcases got into a taxi that took us to the Arequipa bus terminal.

We had the taxidriver drop us off at what turned out to be exactly the wrong side of the terminal. With the help of a terminal employee we managed to get to the correct side with all of our belongings and our offspring. There we had to go to a counter to change our e-tickets for boarding passes. Then we had to go to a different counter to drop off our luggage. Finally we had to pay some sort of traveltax at yet another counter. All very efficient. At that point Monika, the new midwife of Diospi Suyana, also arrived and started her journey trough the terminal. Once that was all done we could go to our bus. This was not just any bus but a night bus in which the chairs reclined to 160 degrees. The children were really excited! 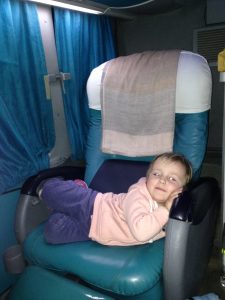 The night went all right. Leah had her own chair but Olivia was either on my or Vikki’s lap which meant that we did not sleep too well. Unfortunately the journey that should have taken 10.15 hours ended up taking almost 12 hours. Olivia was not happy about this and started to throw up 15 minutes before our arrival in Cusco. A taxi driver was waiting for us at the bus terminal in Cusco. We put all our suitcases on top of the minivan but thankfully we were all allowed to sit inside. The route from Cusco is not only astoundingly beautiful, it is also incredibly curvy. Not long after leaving the bus terminal Vikki had to throw up. Half an hour later Olivia started to throw up again. So far this was all done in bags. Not much later Leah started to throw up but instead of in a bag, most of it landed on me. Thankfully Monika was with us and she helped us get trough the journey somewhat ok. Standing still for 45 minutes in front of a landslide did certainly not help. Because of heavy rains an enormous rock fell on the road. It blocked one half of the road. This rock was higher than the trucks that could only just get past it. 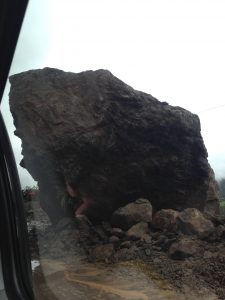 A small rock fell on the road 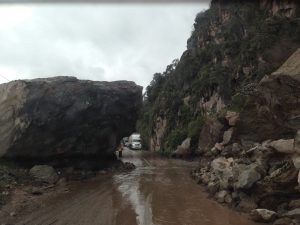 Cars and trucks could only just continue their journey

Tired, dirty and nauceous we finally arrived at our destination Curahuasi. After unloading our suitcases and saying adios to the taxidriver and to Monika we freshened up and went to John and Viola for a warm lunch. John and Viola are our colleagues and upstairs neighbours. We are renting the first floor of their house. The have a son of about Leah’s age which today already turned out to be much fun. Several weeks ago they also welcomed their second boy. Unfortunately he has been seriously struggling with his health since birth. He is at home now but he still needs extra oxygen. It has been a tough and tiring time for them.

We are really happy with our new place that we are making our home. It is situated on the edge of the village which means that everything is a bit further away but also that the view is magnificent.

Our new view from our house in Curahuasi

Living in the mountains and at the edge of the village also has a downside; bugs. We have been here for 1 day now and we have already removed more than 5 spiders (no tarantulas yet nor black widow spiders), 2 scorpions and we have triep to catch a mouse. I just saw this mouse run out of the living room.

In brief we have had a challenging journey but we are really happy and thankful to God for our new place. Thursday March 1 will be Leah’s first day of school. Vikki and I will begin our work at the hospital in the week of March 12. We will easily get through the days until then with getting the house in order and getting to know the village and its people. Thanks your thoughts and prayers.